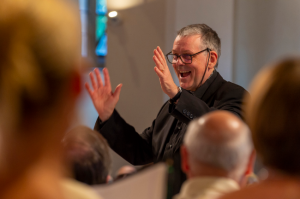 Jonathan was a chorister at Coventry Cathedral and later a choral scholar at Christ’s College Cambridge, where he read mathematics. He then studied at the Royal Academy of Music where he specialised in singing and composition, winning prizes in choral, conducting and orchestration. Jonathan joined the Swingle Singers in 1984 and was musical director for eight of the twelve years he sang with them. During that time he created the majority of their arrangements.

He has worked with many of the world’s leading musicians and orchestras, both classical and commercial; these include the New York Philharmonic under the direction of Pierre Boulez and the Los Angeles Philharmonic under the direction of Luciano Berio. He has performed at Carnegie Hall, New York, with jazz great Stéphane Grappelli and recorded backing vocals for Beatles producer George Martin and French pop star Etienne Daho.

He left the Swingle Singers in 1996 in order to spend more time writing, arranging and orchestrating. He is in constant demand as a choir trainer, works with vocal ensembles all over Europe and adjudicates choral competitions. Closer to home he directs four choirs in North London, and is musical director at St Mary’s Church Walthamstow.

He is an in-house composer with the music publishers Peters Edition. His book ‘Hear the Angels Sing’ was published in 2016 and is a collection of 24 Christmas carols composed and arranged for choir and small orchestra. He is also very busy as an orchestrator, having written many orchestral and string arrangements. He often travels to Prague to oversee the recording of these arrangements using members of the Prague Symphony Orchestra.

In 2013, Jonathan was awarded an ARAM (Associate of the Royal Academy of Music), an award made “to former students of the Academy who have made a notable contribution to the music profession”. He also travelled to Sweden and worked with his old friend Bob Chilcott in Rättvik, then adjudicating in Finland at the Tampere Festival.

Recent commissions include ‘A Day at the Fair’ for Barnet Choral Society and ‘The Blackheath Canticles’ for Fr. Nicholas & All Saints, Blackheath and ‘Under the Shadow of His Wing’ for the Vasari Singers.